At AL Security Stirling, we use the latest high tech equipment to design, build, and manufacture your number plate or show plates. All our ABS (Acrylonitrile Butadiene Styrene) substrate plates are manufactured to BSAU 145d standards. This makes them stronger, more impact resistant, and therefore lasts longer than the old-style plates made in Stirling.

Providing they conform to the rules regulating UK number plates, 4D plates are entirely legal to use on your car. 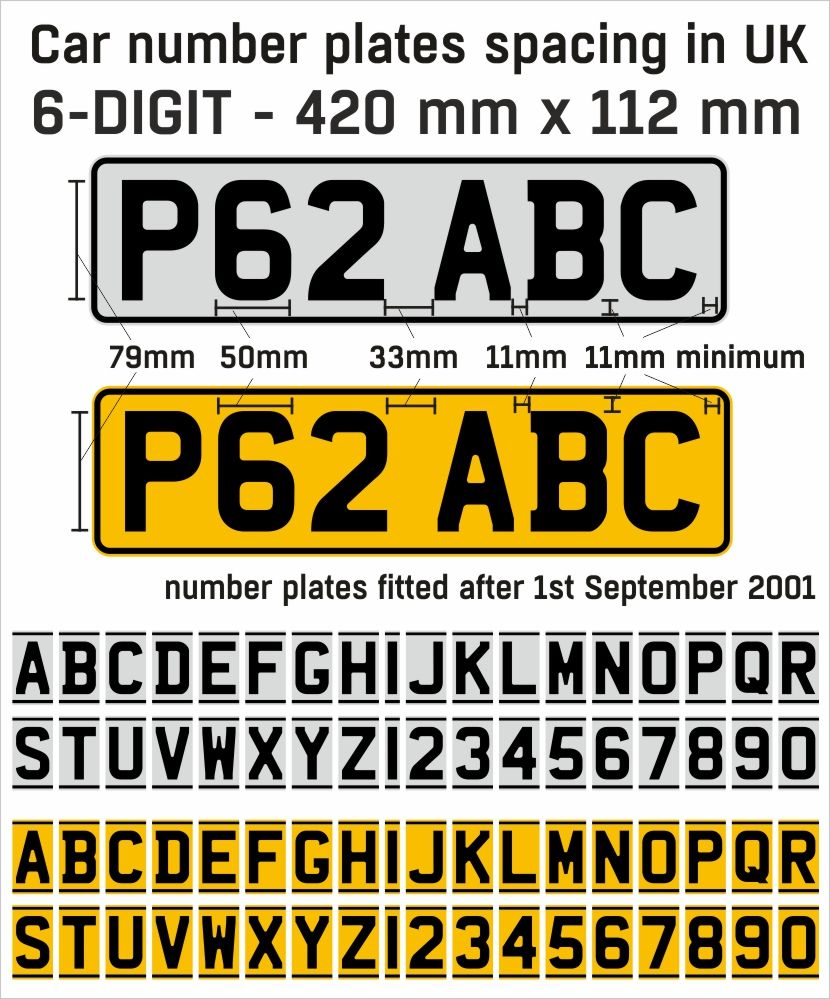 There are a few criteria the number plates must meet in order to be road legal which AL Security ensures are met for every 4D plate issued.

On September 1st 2001 the DVLA introduced a new compulsory font for all number plates in the United Kingdom. The DVLA font of choice for all standard UK number plates is known as ‘Charles Wright’. Any font other than this displayed on any UK number plates is deemed illegal as the font has certain characteristics that make it easy to read and space on any reg.

Characters on legal UK number plates must be 50mm wide and 79mm tall. In addition the thickness of each stroke on the characters must be 14mm.

UK number plate fonts are monospaced. A monospaced font, also called a fixed-pitch, fixed-width, or non-proportional font, is a font whose letters and characters each occupy the same amount of horizontal space. This contrasts with variable-width fonts, where the letters and spacings have different widths. There must be an exact gap of 11mm between each character, as well a 11mm margin around the outside of the number plate. The space in the middle of a registration number must be 33mm.

As mentioned pervious, The material of the plate the 4D characters attached also meet the same high level of British Standard (BS AU 145d) in order to be legal.

It is illegal to have any of the following on your number plate:

Here at AL Security we take the time and care needed to insure both of our standard plates and unique 4D number plates meet all the road legal standards. Starting from £14.99, call into AL Security on 20 Munro Road in Stirling, FK7 7UU to have your number plates printed today.

Speak to someone about your number plate requirements?

For the best plates in Stirling, visit us today at AL Security for your premium number plates. Our number plates are made from the highest quality materials sourced from suppliers from the UK. They are top quality number plates, made in Stirling, at a price that won’t leave you feeling out of pocket. Also, all plates come with a 12-month guarantee. Get in touch today!

Why do have vehicle registration numbers?

The current vehicle registration number format was introduced on 1 September 2001. It consists of two letters two numbers a space and three letters chosen at random.

All vehicles manufactured after 1st January 1978 must display number plates of retro-reflective material. Retro-reflective materials must reach the criteria laid out in the BSAU 145d standard. A superior grade of acrylic material is also supplied capable of withstanding weathering, impact and bend test as stipulated in BSAU 145d.

UK specs require white number plates displayed on the front of the vehicle and yellow on the rear. All main digits must be displayed in black.

By law, each number plate must display a permanent mark with the following information:

You are able to customise with the Euro symbol, Saltire or GB national identifier on your number plate. Any regional flag can also be displayed on the left-hand side of the number plate, with its identifying name or letters.

If traveling within Europe this will be required and no need for a bumper sticker.

Vehicles constructed before 1st January 1978 (‘S’ registrations and before) can display classic black and silver number plates. We don't produce these on site but are happy to order from our supplier with a small lead time to give your classic that new shine again.